Putting A Wet Wrapper On The 2017 Racing Season 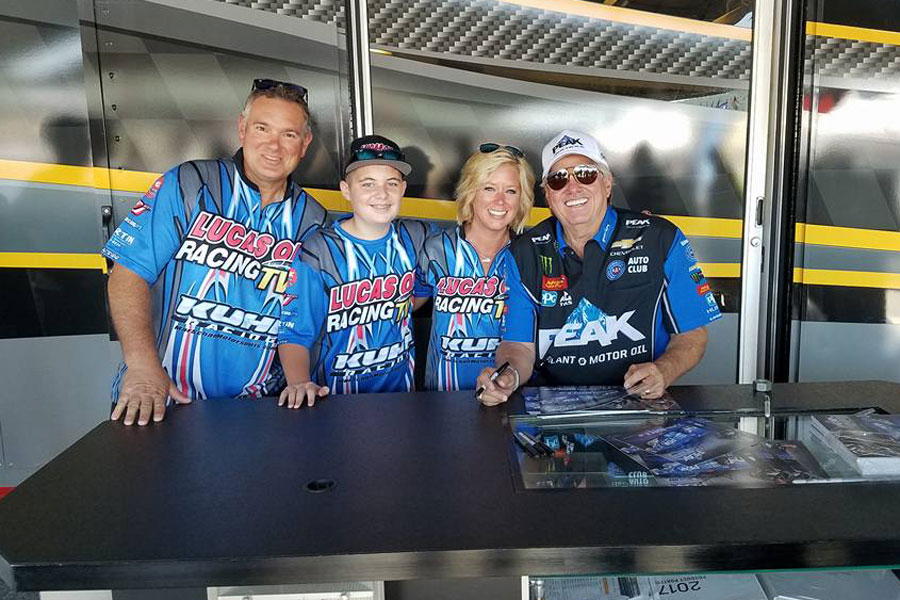 The last two races of the Kuhn Racing season in the Lucas Oil Racing TV junior dragster powered by Boccella’s Performance were rained out. We attempted to compete at Maple Grove and at the Cecil County Turkey Day Race which we have done well at over the last four years, but the fall weather would not cooperate.

2017 was Braylon’s first full season in the 7.90 class. We had hoped for better results based on how we ran last season in the old car and how we finished the season after the debut of the new combination. The crew chief, yours truly, decided to not use weight to manage the speed and ET of the car, but instead tested and ran with a restrictor placed in the intake manifold. This is a method that has worked very successfully for others we know, but somehow our combination didn’t fare too well. Then we had another issue with fuel management and we chased our tails till early June with a gremlin that I couldn’t put my finger on.

We purchased another complete engine from Craw’s Racing after dropping the troublemaker off at his shop to find the issues. I had been planning to get another engine anyway so we have a backup should anything happen at a race, because points are so tight at our home track. I would hate to give any points away if it could be helped with a simple engine swap. The issues plaguing us just expedited the purchase process. The next day the Craw’s team called us after diagnosing our issues and started to repair the original motor to be used as our backup.

We ended up running at 33 races and did 2 test and tune days, and we had 5 races rained out. Braylon put 105 passes on the new motor and about 55 on the old troublemaker. He found the Winner’s Circle once, had a runner up finish, a semi-final and a quarter final round appearance. He finished in the top 10 in points at Maple Grove by the slimmest of margins. There were more first round losses than second round losses and we hope that in 2018 we can hit the track running with what we learned not just on the track but off it as well.

For next season we are looking to take some more safety measures on and around Braylon and take a step above the minimum requirements. We know we have the best USA made gear from DJ Safety, we just want more. Braylon has grown physically a lot in the last year, but we want to keep him moving forward academically and with his mental focus. The racing is supposed to be fun and it definitely keeps us together on weekends, which is a lot better than going our separate ways with individual hobbies. We love our racing family and the friends we have made at the track and in the performance marketplace.

I want to personally thank Michael Boccella from Bocella’s Performance, Tom Bogner from Lucas Oil, Ben Conant and Loren Hill from DJ Safety, Jason Allen from ProThings, Lela Martin from NGK, Fred Craw and Al Kubicke from Craw’s Racing and Tim Charlet and Joe Morrison for allowing us to be a part of the Right2Breathe® family. Without your support, belief in us, great products and services we couldn’t have raced as much as we were able to. Our family thanks you all.

This is PRI week so hopefully I will see many of you in Indianapolis in a few days. For now I will leave you with some photographic highlights of the 2017 season. I hope you enjoy.