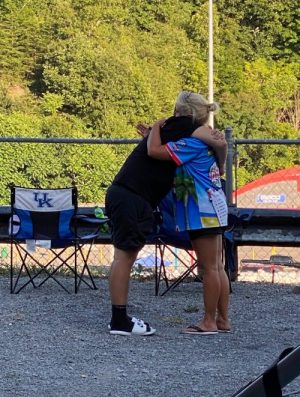 What a weekend! It was beautiful weather at the Mopar Express Lane NHRA Nationals, and an emotional ending to Braylon’s 8 year junior drag racing “career”!  There were so many “LASTs” today:

The LAST trip down the track in a junior dragster.

The LAST time being recognized by the NHRA for a job well done in seasonal points at a national event.

The LAST time I get to punch his shield and point down track when the RPMs are right to stage the car.  It was very cool to have local Pro Stock legend Kenny Koretsky on the line and rapid Pro Stock up-and-comer and Lucas Oil teammate Kyle Koretsky help stage the car.

It would be the LAST time Jen cleans and preps the tires, checks the air pressure and the list goes on, but lets focus on some “FIRSTs”!

I remember that FIRST conversation I had with Fred Craw when we were looking to get involved with the sport of junior drag racing.  It was a Sunday and we went to Cecil County to see some juniors race at their program.  We set out to talk to some owners or maybe find a car for sale.  Rob Poznek, who worked for Fred, gave me his number and said to call him.  Much to my surprise, Fred called me later on that same day, on a weekend to boot!  That told me a lot about his commitment to the sport and to a customer that wasn’t even officially a customer yet.  Hands DOWN, I recommend Craw’s Racing for all your junior dragster engine needs.  In 8 years of racing through 8.90 and 7.90 we NEVER had any type of catastrophic failure where we had to change motors at a race.  We never broke a cam, spun a bearing or broke a connecting rod!  I am super proud to say that because I don’t think many can.  Between Craw’s and Lucas oil it was a perfect combination.

I remember the text message from Jen when he got his FIRST round win with Marlin Spotts as crew chief while I was working on the FIRST junior dragster of our own. Then shortly after that text I received another that said ‘he had his FIRST contact with the wall’ in one of Marlin’s cars on that same pass.  What a flip flop of emotions.  We were working on the body of our first car at John Martin’s shop to surprise Braylon with it.  I knew he was headed to a race but we needed this car done and Marlin actually knew what he was doing at the track, I did not.  Thanks Marlin, and sorry about that wheel!

I remember that FIRST Wally win at Maple Grove and finally his FIRST points race win at our home track a couple years later.  The Wally came right at the end of the season right after we brought the Mike Bos car and started running the 7.90 class.  Up till that point he toiled with no wins and four final round losses that season at our home track.  He finally broke through for a win a couple seasons later and then a track championship that same season.

We remember the FIRST, and only, divisional championship at Numidia and subsequently his FIRST speech in front of hundreds at a banquet.  The Craw’s motor was printing tickets at Numidia in 2018 and he broke through for the win in the 13-14 year old category.  He had a couple of close calls earlier in his career to do the same but couldn’t seal the deal.  What a proud moment for us all and our newest sponsor that season Hoosier Tire Mid-Adlantic.

I vividly remember counting points till that last run when Braylon clinched his FIRST, and only track championship.  It always comes down to the final race of the season at Maple Grove.  Not too many racers have carried a commanding lead throughout the season where a championship was obviously in their grasp.  Back in the the last season of 8.90 when Bray went to four finals without a win, he could have won the championship on that last day, but Jeremy Ketterer stopped us in one of the late rounds and his brother CJ went on to win the championship.  Braylon finished in a tie for 2nd and 3rd in points but ended up mathematically in third because Katlynn Hoffman had a win or two and we didn’t.

So many things feel like they just happened yesterday because time goes so fast.  One of the things that took time was the maturation process in the car, one that went from being scared that first night actually on the track, to having a must win attitude.  The must-win mentality took a while to get through.  Many times I could hear shoes  being thrown inside the trailer when we would get back to the pit, and the time slips looked like they were processed at the recycling plant and ready for Kimberly-Clark.  Eventually the thought process became one of ‘it is what it is and I know what I did wrong.’  That was worth the pain, wait and parental redirection to finally get to!

Helping the younger racers and being there for them when they lost or getting told point blank by them ‘your light was terrible’ is irreplaceable!  That age of no filter banter is priceless.  Thank you to those that helped us whether you were in the other lane or listening to us at the trailer, that goes for all of us, we appreciate it.  Those memories from the few years that you are in the niche, the small group, the annoying kids that take too much time and “the future of the sport” are memories to last forever.  The trips to Bristol and Charlotte and the “Therapy” will be truly missed, and we deeply miss Mr. Mike Bos who designed and built the MAVTVplus Junior Dragster in 2016 for us.

From the FIRST cheer to the LAST tear we want to thank everyone we have met, befriended, shook hands with, raced against, and were teammates with.  The car is on it’s way to a new home in Texas where a 12 year old will begin the process of licensing and being ready to run 7.90 when she turns 13 in a month or so.  We couldn’t be happier for her.

Thank you Lucas Oil, Boccellas Service Center, NGK Spark Plugs, Craw’s Racing, Hoosier Tire Mid Atlantic, GoDragRacing.com and ProThings Apparel for your support and trust to represent your brands. I hope we have done well!  We are  proud to announce that Lucas Oil has signed on for their 11th season already with our team for 2022 and we are looking forward to continuing our partnership long into the future.

The transition to the next chapter has begun not only on the track in a door car, but on the college campus as well. Racing is only a distraction, a hobby to some, a way to spend a part of a weekend, but for us the lessons and memories will last forever. Thank you and we will see you at the track!