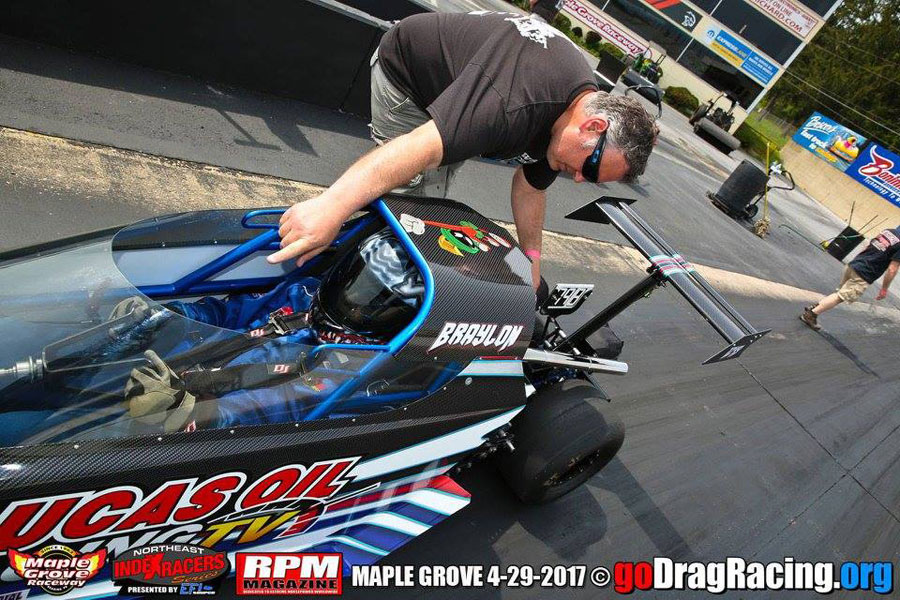 I hope these two are found soon. Their family wants them returned to the track, no questions asked. They were last seen at Cecil County Dragway on April 9th in the Winner’s Circle standing with the Lucas Oil Racing TV junior dragster. “I just want them back so we can go rounds,” said wife and mother, Jennifer.

In all seriousness the Mar-Schan Motorsports/Kuhn Racing team hasn’t been in the tank, but we aren’t setting the world on fire either. A round win here, a second round win there, and some first round losses, but more questions than answers.

One of the blessings of racing at Maple Grove is also a curse, the quality of the competition. There are no easy rounds and no one is a sitting duck either, but as the crew chief I don’t think a GPS would help us find our way some days. I keep reminding myself this is supposed to be fun.

It’s not a job, but the stress and frustration due to self-perceived underachievement sometimes get the best of all of us in our pit. Questions like should Braylon hit the practice tree instead of playing video games after school? Should he immerse himself in the written wisdom of Peter Biondo on how to “hold numbers?”

Maybe baseball was a better option as a summer sport. Ummmm…No! I keep trying to remember he is only 13 years old, but the taste of success, however sparse, has left us hungering for more and expecting it more often than not.

Since the last update at the end of April we have had four races finished and one rained out. On April 29th we lost in the second round and on April 30th we lost in the first round. If we can’t win the race, which are typically five rounds long, we want to make it to at least the third round at each points event. This will keep Braylon in the top 5 or 6 in points.

I honestly don’t remember how we lost at those events, but it was still better than being at work in all honesty. Win lose or draw it’s always a privilege to see the pictures taken by the photographers to document the irreplaceable investment as a family we put into this sport.

After a rain out on May 13th we are brought to another “double” weekend at Maple Grove with a chance to climb the ladder on the 20th and 21st. On day 1 we weren’t rock solid but we did manage to make it to round 3. We didn’t win the war, but a small mental victory was had and we hoped to capitalize on that on Sunday.

Sunday dawned with clear skies and low wind for the first round of time runs. The track was on kill and with the low humidity and lack of wind we were a lot quicker than we wanted and were allowed to be. I decided to add a mere ten pounds to the car to get us closer to our 7.90 second legal time.

Conversations between runs centered on how nice the weather was, the sunshine and the good times had by the families who spent the night at the track. As we headed up to the staging lanes for our second time run the clouds had rolled in, the temperature dropped and we were staring a variable headwind in the face. In hindsight I definitely did not need to add that weight AND I should have made a carburetor jet change to compensate for the cooler temperatures albeit only four or five degrees.

As a result the car did not get up to the temperature it likes on the launch, and I am starting to figure out where the bottom of that range is unfortunately. The car hesitated. Braylon’s reaction time suffered and our ET was questionable after the weight change, weather change and stumble on the start all hit us at once.

All this smacking you in the face as a driver or crew chief at once can wreak havoc on the fragile psyche of an already frustrated team. In true Maple Grove fashion for the first round we were paired up with Saturday’s winner Killer KK Kershner. She strapped a .008 reaction time on us and it was over on the starting line in round 1.

Disappointment, frustration and questions all come to life in less than 8 seconds, but the reality of another race without a win lasts a little bit longer. We were sent packing early again, but I have no doubt we will get it figured out hopefully sooner than later. Fortunately it is a long season with some big races on the horizon. In less than a week we are back at Maple Grove for the Lucas Oil Regional Drag Racing Series and then another “double” points weekend right after that.

Usually in an hour or two, a hug, a pat on the back or high five in reassurance that everything will be ok from Jennifer and I snap out of it. Well sometimes anyway, but we all feel the desire to do better and make sure we can support those that believe in us week in a week out doing what we love to do.

We have the best of the best and we hope that our name and our reputation are as good as theirs someday. Don’t worry, I am sure the missing driver and crew chief will reappear soon, till then say a prayer for Jennifer, on second thought even if we are found say a prayer for her anyway, she puts up with me.

Thanks!
See you at the track!