Press/News
Home » Getting Caught Up 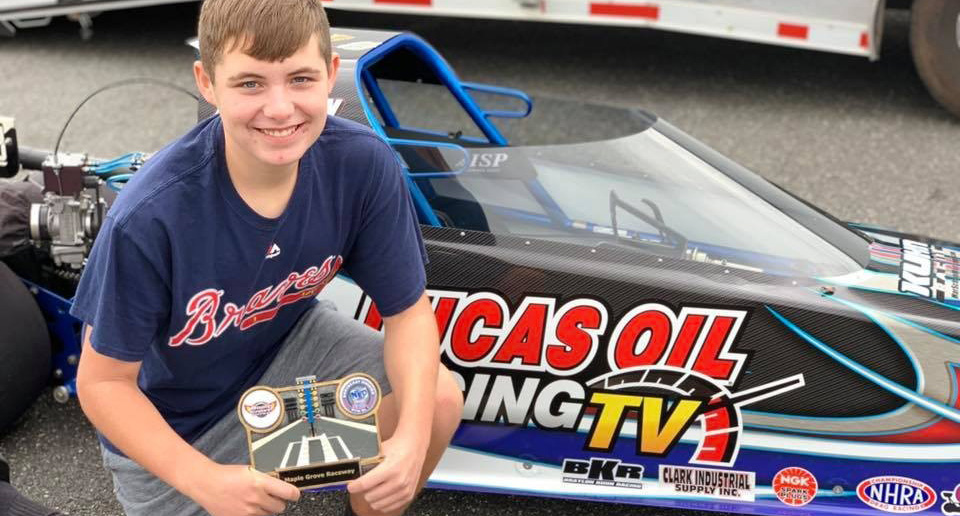 Since back in August when Braylon won the Division 1 NHRA 13-14 Year Old division title we have had two races affected by rain, one which we elected not to chance and didn’t attend and the other was rescheduled.  We also competed in three events at Maple Grove Raceway, Saturday August 25th, Saturday September 8th and Saturday September 22nd.  Unfortunately we never got past the second round in the first two races but did manage a semi-final appearance on the 22nd.

It was a non-points day today but we still wanted to race and take some shots at the tree.  Braylon ended up with a semi-final loss turning on the red light with a -.001 light, but he had to be good against his opponent who was .010 green.  There are no easy passes at Maple Grove or at most races anywhere.  These kids are deadly!

On Saturday and Sunday September 15th & 16th we attended the NHRA Dodge Nationals at Maple Grove to see some friends like Roy Freeman from Hoosier Tire Mid-Atlantic and had a chance to discuss their tires we have been running all season.  We have had consistent results with the wider width and JR1 compound that these tires are made from.  Even though we aren’t turning on the win lights we would like this year I know it’s not the tires or anything mechanical thanks to reliability and technical service from Craw’s Racing.  We also got to meet Josh Nixon from Universal Technical Institute and bounced some marketing ideas around, and also Joe Phillips from Lucas Oil Products.  Jen and Braylon also got the annual photo with old family friend John Force.  It’s very cool looking at these over the last dozen years or so and how Braylon has grown.

We head back to the track this coming Saturday after having a couple weekends off.  We will be at Maple Grove once again for the final points race of the season.  Our team has also received several small bottles of a product not yet on the market, which is a lubricant for those running alcohol or E85 based fuel that will help prevent the corrosive products that those fuels possess.  It’s exciting being a part of an organization that is always moving forward and supporting the racers with new products and contingency payments for using their products.

After this coming weekend we have three race days left on our schedule taking us into early November.  Then it’s time to start planning for next season with the Performance Racing Industry show being my official kickoff event.  I hope to see many of you there as I try to work on adding some more products to the Mar-Schan Motorsports LLC retail lineup.  We have had a banner year with the addition of Pyrotect, ISP and NecksGen.  If you have any thoughts about adding me to your dealer network give me a call or email me at sales@marschanmotorsports.com.   My new phone number is now 610-568-2465 as a side note.

Thank you for your help and support and we will see you at the track!