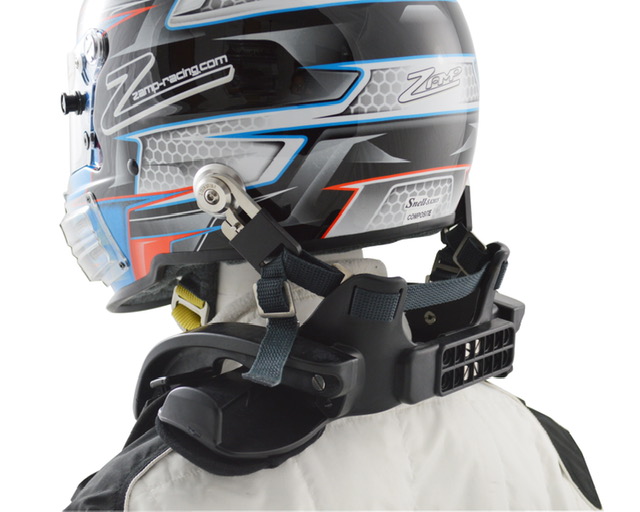 As a racer with a son who races an NHRA Junior Dragster, and as a safety gear supplier, I am not writing this to line my pockets or to scare anyone away from racing.  We all know that sports and recreational activities assume a risk, whether it’s horseback riding, football or scuba diving.  I also do not claim to be an expert in biomechanics or physics, and the following is written to the best of my knowledge and with sincerity.  Researching the topic of head and neck safety has reinforced my belief in the benefits of wearing a head and neck restraint (HNR) in motorsports.  I wore one for about four years in an index style class before stepping aside to run the junior, but I wouldn’t get behind the wheel without one nor send my kid down the track without one.  He has already been wearing a NecksGen Rev2Lite for a couple of years.  In discussions with members of the NHRA technical department and the SFI Foundation I have a better understanding of what prompted the new NHRA rules requiring their use in the junior dragster ranks. With that being said I hope what I have put together concerning them is helpful, so let’s jump in.

Racing of all sorts has been around for thousands of years.  Automobiles have helped satisfy the need for speed for over a hundred years, but only in the last several decades has driver’s safety been of key concern.  How many times have we seen videos that showcased the heroes of yesteryear rocketing down sand, salt and asphalt wearing T-shirts and World War II era goggles?  Eventually, as people got hurt, the use of helmets, safety harnesses, fire systems and flame retardant clothing was made mandatory by sanctioning bodies that wanted to protect their drivers.

Many drivers scoffed at the new gear, feeling that staying cool or looking cool was more important than the slight risk of an accident or injury.  Their thought process was very similar to how ice hockey players rebuffed the mandatory helmet rule imposed by the NHL in 1979.  Many industrial and commercial contractors felt the same way about the OSHA mandate to wear a full body harness to tie off for fall prevention when working at an elevation above 6’.  As foreign a concept these two examples were in the not too distant past, most would agree that it would be foolish to not use these advancements today.  Safety culture is evolving as post-accident analysis is becoming more of a science.  Fortunately better methods of injury prevention are being developed, and it’s for everyone’s benefit.

One such prevention device for the racing market is the head and neck restraint.  The HNR is not a new concept or idea.   The idea was spawned in the 1980s by Dr. Robert Hubbard who was a bio mechanical engineer at Michigan State University.   Dr. Hubbard was introduced to motorsports by his brother-in-law Jim Downing.  When these two lost a mutual friend in a motorsports accident they began their quest to better protect the neck in the cockpit of a race car.

Hubbard and Downing realized that their friend’s death was attributed to the force of a sudden stop, contributed to by the tension of the seat belt.  To prevent or minimize future injuries or deaths from this type of trauma, they developed what is known as the HANS device.  It consisted of a collar that sat on the driver’s shoulders underneath the safety harness.  Attached to the collar are straps that connect to the driver’s helmet to limit the forward movement of the head and neck.  This device wasn’t received with open arms though till over 15 years later, and even then there were, and still are reservations pertaining to its use.

The eye opener that helped bring Hubbard and Downing’s work to light was the passing of Dale Earnhardt Sr. at the 2001 Daytona 500.  Their HANS device was around before his death, but his loss helped expedite the sanctioning bodies to make them mandatory.  In what seemed a very “normal” looking collision and very anti-dramatic, Dale Sr. suffered a basilar skull fracture which caused his death.

After reviewing the information provided, Downing concluded that an impact at 42 miles per hour is all that it can take to kill you.  He explained that a lot can be learned from studying Dale Earnhardt’s death, “In its detailed two-volume study of Dale Earnhardt’s fatal crash at Daytona, NASCAR consultants determined his car hit the wall at 160 mph and was suddenly slowed by 42 -44 mph in just 80 milliseconds. The 42-44 mph difference from when he first hit the wall and the ensuing sudden deceleration is known as the Delta V.”

The same can be said for the perceived “slow” junior dragster or junior street class.  It’s not the speed of the impact but the sudden stop that can cause serious injuries, especially with the weaker neck muscles.  Do you remember Isaac Newton’s Law?  “An object in motion tends to stay in motion unless acted upon by another force.”  This is what happens to your head in an impact when the torso is restrained, it stays in a forward motion.   Unfortunately Earnhardt snubbed Mr. Downing in a NASCAR garage in 2000 when he was making a case for his HANS device to other less stubborn drivers.  Earnhardt’s passing has brought more attention and better protection for those in motorsports.

New rules established in the NHRA, ANDRA (Australian National Drag Racing Association) and the IHRA in Australia, have made an SFI 38.1 spec head and neck restraint mandatory for their Junior Dragster competitors as early as January 1, 2020 in Australia.  This is a rule that has sparked controversy and debate on both sides of the globe.  Let’s examine the two most popular questions that I have heard.

That sounds complicated but in a nut shell, children are weak and their muscles can not resist stress like an adult’s can.

From my conversation with NHRA management these devices will be required in a lot more classes in the very near future.  This small step gives time for the manufacturers to be able to ramp up production and meet the needs of racers.  They decided to start with the class that they thought would be the most vulnerable.   I also think it’s a case of children not being able to speak up and protect themselves so the NHRA has decided to assist.

The neck restraints work along with a PROPER FITTING, properly located and tight harness as well as the helmet to lessen the whipping effect that a sudden stop has on the base of the skull and the neck.  The basic concept is this; in a crash without a device, the shoulder harness and seatbelt restrain the driver’s torso, but only the neck restrains the head and helmet.  A HNR reduces the whipping action of the head, keeping the driver’s head from being pulled away from the upper body, and can reduce the stretching forces by 80 percent.  In a frontal impact, the tethers restrain the head’s forward movements while the torso and device are restrained by the shoulder harnesses.  All of this works in conjunction to dramatically reduce injuries as can be seen in the two pictures below.

Notice the difference between a driver using an HNR in the bottom picture, and a driver without one on the top at the same point of time in two totally different tests.  Also notice how far the harnesses stretch in an impact!  The SFI 38.1 specification sled testing is done at only 39 mph.

The devices themselves have evolved over the years to provide greater comfort and ease of head movement from side to side.  Pricing has also come way down.  An SFI 38.1 device can be purchased on my website for as low as $269.00 at this time.  Keep in mind as per NHRA rules the use of a head sock, helmet skirt or the old neck collar must still be worn in conjunction with the HNR to reduce the possibility of burns to the neck.

Unfortunately there are still fatalities and injuries in all forms of sports, including motorsports.  We can’t just assume that the cars provide the protection or have the mentality that ‘it won’t happen to me I don’t go fast enough.’  No one is invincible and accidents do happen.  Ultimately many of the rules on the track, just like in an industrial work environment, are written in the blood of those who have been injured or perished, so it is with good reason that we adapt and embrace them.  With all the advancements and innovations in the head and neck restraint offerings over the years, there is no reason why you and your loved ones can’t and shouldn’t be wearing one.